He was born on 16th October 1909 at Mieczki near Lomza.  He studied to be a priest and was ordained on 28th March 1936; he studied Canon Law at the University of Warsaw.  In 1939 he had been sent to France to learn the language and, when war broke out, he joined the Polish Army at Coetquidan.


On 9th February 1940 he was commissioned in the rank of Captain and posted to be a Chaplain at the Polish Aviation Centre at Lyon-Bron.  After the capitulation of France he was among those who escaped to North Africa and later he moved on to England.


He was a Chaplain to the Polish Bomber Squadrons (including 304 Squadron) at RAF Lindholme near Doncaster in Yorkshire and later at RAF Cranwell in Lincolnshire before moving on to RAF Halton Technical School at Aylesbury, Buckinghamshire.  From September of 1940 he was given the British rank of Squadron Leader.  In addition, his pastoral care covered injured airmen and orphaned and neglected children. 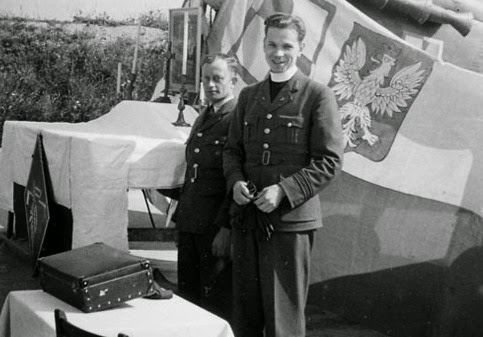 Preparing to take a service - the exhaust of a fighter is just
visible (top right) and the flag is draped over the nose
In 1946 he left the Air Force and returned to Poland where he was vicar of Ostroleka before he resumed his religious studies and then achieved a Doctorate in Canon Law from the University of Warsaw in 1949.  He then became the Spiritual and Seminary professor at Lomza until 1967.  At this time he took over as Rector of the Seminary.     On 19th March 1970 he was ordained as a Bishop by
Cardinal Stefan Wyszynski and Bishops Jan Mazur and Aleksander Moscicki during which time he was responsible for the creation of 11 parishes and the construction of 36 churches.  In 1975 he organised the 50th anniversary celebrations of the Diocese of Lomza.


For the purpose of raising the spiritual level of the priesthood, he founded the Diocesan Pastoral institute in Lomza where the priests were educated in the needs and challenges of the modern, post War world.  In Suwalki he created the Institute of Higher Religious Culture and Consultation Point Academy of Catholic Theology.


In Tykocinie he founded the House of Retired Catholic Priests; these ideas realised the concerns of the Second Vatican Council.


He saw the urgent need for the religious upbringing and development of young people and, for this purpose, he created several centres of retreat.  He attached great importance to the systematic catechesis as an inspiration for new priestly and religious vocations and the social and charitable association Unum was created on his initiative.


He was an activist in the apostolate of sobriety and was Vice President of the Episcopal Commission for Sobriety.  He was also chairman of the Polish Episcopate for the Ministry of Women and the National Chaplain of Military Veterans.  During the period of martial law, he gave support to the Solidarity internees and called for their release


In the final months of his life he was exhausted  and finally he died on 6th September 1982 and was buried in the Cathedral at Lomza under the stewardship of the Polish Primate, Archbishop Jozef Glemp.


With many thanks to Fr Jozef Lupinski for his invaluable help with this story
Posted by ARCHIVE at 21:14