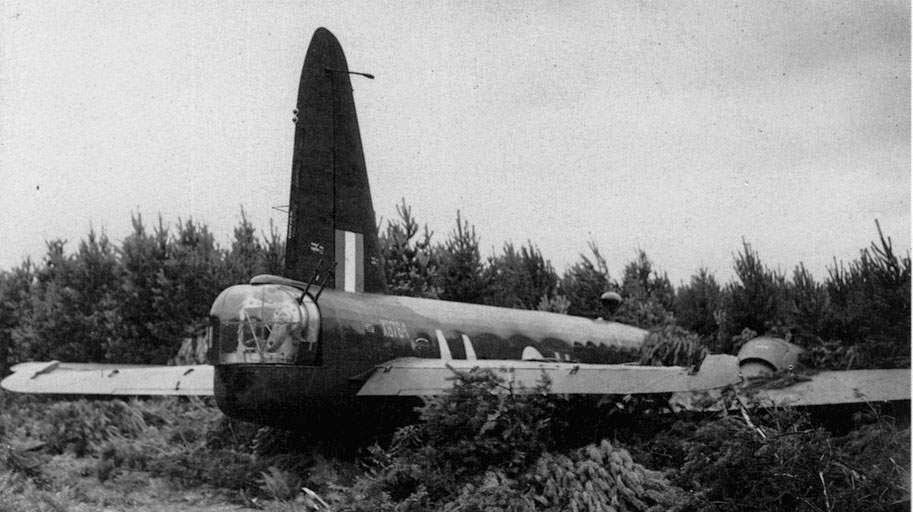 Wellington X9764 after the first crash
While over the Zuider Zee, returning from operations on the night of 12/13 August 1941, 75 Squadron Vickers Wellington X9764 (AA-V) was hit by a long burst of fire from a night fighter. The enemy aircraft did not repeat the attack but damage to the Wellington was extensive. By the time they returned to  RAF Feltwell, their fuel was nearly exhausted. The pilot ordered the other five crew members to bale out but he had no time to jump before the engines cut out. In the bright moonlight he saw that he was going to crash among the young conifers of Thetford forest but, skilfully, he managed to guide the aircraft into one of the wide firebreaks.


Wellingtons were tough and highly repairable and, despite the damage, X9764 was back in service a few months later, only to be lost with a Polish crew of No 304 Squadron in the Cologne raid of 5/6 April 1942
X9764 (NZ-X)    6th April 1942
Whilst on a bombing mission from RAF Lindholme in South Yorkshire to Cologne, this Mk 1c aircraft was shot down near Geetbetz, (Brabant), 28 kilometres ENE of Leuven, Belgium.  It was detected by radar on its return journey and intercepted  by a night fighter from Brusten airfield near Sint-Truiden.  This pursuit aircraft, a Messerschmidt Bf110, was crewed by Oberleutnant Heinrich Petersen and Feldwebel Ludwig Leidenbach of 6/NJG1.
None of the crew survived and all were initially buried at Sint-Truiden (then known as Sint Trond).  Later, the bodies were exhumed and moved to the War Cemetery at Heverlee near Leuven, Belgium.  In 2009 a memorial was built near the crash site.
P/O Assman had previously survived being shot down by flak in W5720 on 26th October 1941.
Luftwaffe records show that it was shot down from a height of 16,000 feet by an attack at very close range (estimated at 30-40 metres); a burst of gunfire hit the port engine which immediately burst into flames.  According to Petersen, the plane flew level for another three minutes and then fell straight down and crashed at 02.28 am on Easter Monday.
The entire crew were killed; three bodies were found in the cockpit, the rear gunner was still in his turret, one airman lay beside the wreckage and the other crewman was found about a mile away; it is not clear whether he had baled out or had simply been thrown out of the doomed plane.  Inside the fuselage was a basket containing two pigeons.
The dead were: F/O Zygmunt Natkanski, P/O Ludwik Karol Assman, P/O Alfred Osadzinski, P/O Kazimierz  Ziemianski, Sgt Zdzislaw Babraj, Sgt Dominik Marian Grajnert.
Oberleutnant Petersen was injured when his Messerschmidt Me110 was in a mid-air collision with a Short Stirling, R9314 (OJ-T) on the night of 5th June 1942.  The Stirling lost its rear turret but Oblt Petersen’s aircraft was a total loss and he baled out.  He survived the war and was credited with 2 kills.


Posted by ARCHIVE at 23:56 No comments: Links to this post