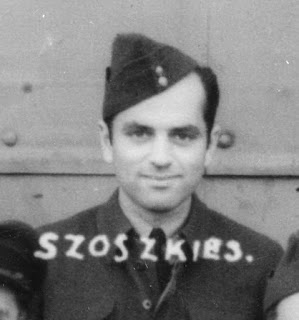 
He was born in Charkow, Russia (now Ukraine) on 17th march 1920, the son of Henryk and Nadzieja (nee Wilner) and grew up in a loving home in Warsaw where he completed his educational studies before leaving to spend a year each in college at Antwerp, Belgium and at the London School of Economics in England.


On his return to Poland, he would normally have been drafted to do his two years military training but he was called up indefinitely for War Service.  He fought through the September Campaign in Poland and was one of the many who were forced to cross the border into Romania where they were disarmed and interned.
However, there was considerable sympathy with the Poles at this early stage of the war and relatively small bribes were all that was needed for a guard to look the other way whilst they simply walked out of the camp.  The Polish Government had an excellent network to help these men with money, travel documents and false ID papers to get them out of Romania under the eyes of the many Gestapo agents placed in that country.


There is no clear evidence of which route he used to leave the country but what is certain is that he arrived at Coetquidan and rejoined the Polish military with the Ist Brigade of infantry on 14th November 1939.  This was a short lived arrangement as he was selected for Air Force training and is recorded as having arrived here on 30th June 1940 which means he left France at the very last minute but remained as a corporal with the Polish Infantry until he formally joined the Polish Air Force, Service No 709549, on 8th June 1942 and began his initial training at RAF Squires Gate on the Blackpool complex.  This consisted mainly of Drill, learning the King's Regulations and English language training.  This was relatively easy for him as he was already fluent in English, French, Russian and Hebrew as well as his native Polish.


His initial recommendation was for pilot training but he was re-mustered to train as a navigator and began that training on 1st August 1942 at No 8 Air Observer School at Ancienne-Lorette, Quebec which is now Quebec City Jean Lesage International Airport and spent several months in Canada training on Avro Anson aircraft.  He left with a glowing report from the CO of that school and returned to England on 12th January 1943.


However, his training was not over and he spent two weeks at No 5 Air Observers School at RAF Jurby on the Isle of Man and two months at the No 3 School of General Reconaissance which indicates that he was already destined for 304 Squadron as this school specialised in marine training.


He was then sent to 6 OTU (Operational Training Unit) and briefly to 3 OTU where he learned the fighting tactics used by the British and Polish air forces.  It was also a place where the crews were encouraged to come together and learn the teamwork and trust that their lives might depend on in hostile action.  Finally, his crew were sent to 304 Squadron on 31st December 1943.  The initial crew was F/Lt T.P. Kolanko (first pilot), F/Sgt T. Boba (second pilot), Sgt L. Szoszkies (navigator), Sgt M. Kyczkiewicz (Wireless operator/air gunner), Sgt I. Neumann (air gunner), Sgt S. Slowik (Wireless operator/air gunner).  They were initially based at RAF Predannack in Cornwall. 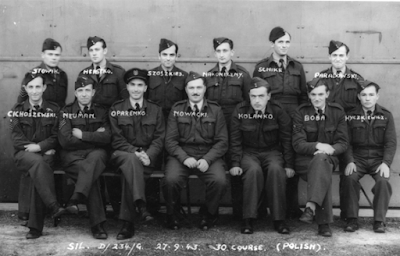 Group photo at 6 OTU, Silloth Cumberland (now Cumbria)
Several of these men served with him
Sgt Szoszkies flew 44 hostile sorties with the squadron always at low level and for many hours over featureless seas and frequently in very bad weather but it was a vital task and kept the U-boats submerged and at slow speed to prevent detection.  For the hunters it was a long boring drag where concentration had to be maintained because of the low level at which they were flying.  For the hunted because it kept them away from their prey and it kept them from recharging their batteries and discharging the foul air and carbon monoxide that was building up inside their submarines.  This was 1943/1944 when the Allies were beginning to take control of the Battle of the Atlantic and U-boat losses were mounting rapidly

Handwritten note of his reposting to 304 Squadron


On 6th January 1945, his long tour of duty expired and he was posted back to the Polish Depot at Blackpool from where he was then posted for an Officer Training Course which he completed and was then returned to the Squadron on 11th May 1945 and the War had been over for 3 days.  He was promoted to Flight Sergeant on 5th May 1944 and Warrant Officer on 13th August 1945.  He remained with304 Squadron until 6th May 1946 when he was transferred back to Polish HQ before being demobilised on 16th July 1946.  His promotion to 2nd Lieutenant came through on the same day as his discharge from the Polish Air Force.  After re-entering civilian life he rejoined his family in the United States of America where he had a successful career in Industry.
In recognition of his war service, he had been awarded the Krzyz Walecznych (Cross of Valour) on 27th September 1944.  He was ganted a bar to that award on 7th December 1944 and a second bar on 7th September 1945.  He was also awarded the Polish Air Medal and British Campaign medals.


At the time of his death, in October 1983, at the early age of 63, he had been President of Panasonic in Canada for 16 years transferring there from the US division and virtually starting it from scratch.  He was a success in both military and civil life.  He had changed the spelling, though not the pronunciation of his surname to Shoskes when he rejoined his family in the USA
An Obituary Notice appeared in the National Post in Toronto on 22nd October 1983 - see below 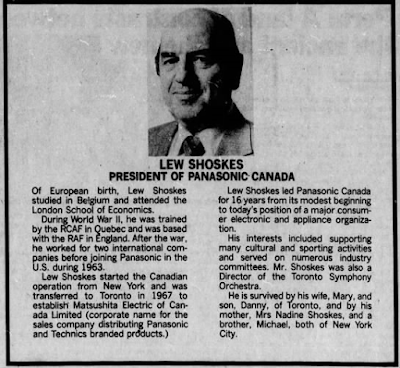 Posted by ARCHIVE at 16:21 No comments: Links to this post