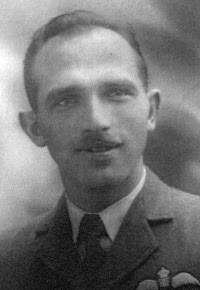 He was born on 1st January 1916 near Uniejow where he was educated and then trained as a locksmith in Lodz between 1932-1936. In 1937 he trained as a glider pilot.
On 11th January 1938 he was conscripted into the army. He was attached to the 3rd Air Regiment in Poznan and completed his pilot training at Brzostek aerodrome. Because war was imminent, on 28th Aug 1939, he travelled to Lwow, arriving there on the day that war broke out. On 17th September 1939 he was ordered to fly his regretsplane to Chernivtsi airport in Romania (now Ukraine).
On 5th November 1939 he sailed on the SS Patris, probably from Constanza on the Black Sea and reached Valletta in Malta six days later. He transhipped onto the Cunard liner SS Franconia and sailed for Marseilles. On 20th November 1939 he arrived at Lyon-Bron but was bitterly disappointed at the very poor living conditions and their total inactivity.
However, in late February 1940, he was chosen to go to England and did so without without regret – he wanted to fight! He left Cherbourg on 2nd March 1940 to sail to bound for Southampton. He joined the Polish Air Force in exile the following day at RAF Eastchurch in Kent. He was sent on to RAF Manston in Kent and then to the Polish Depot in Blackpool where he was assessed and sent on to RAF Hucknall in Nottinghamshire on 18th May 1941 to begin familiarisation with British aircraft. His next move was to RAF Montrose in Scotland where he trained on Miles Masters and Hawker Hurricanes. He completed his training on 8th August 1941 and was given his RAF Wings –effectively his licence to fly – and with it, promotion to Sergeant.
His training so far had been on fighters so it is odd that, almost exactly a year later, he was posted to 304 Squadron at RAF Dale in Pembrokeshire, Wales. His task was anti-submarine warfare, Allied shipping protection and Axis shipping harassment.
On 26th August 1942 he flew his first mission and continued until June 1943, presumably completing his tour of duty. After this his whereabouts is unclear (except that he was still on the squadron strength on 8th July) until 13th November when he was transferred to 138 Special Duties Squadron at the secret airfield at RAF Tempsford in Bedfordshire. His job here was flying supply missions and dropping agents into occupied Europe and he was promoted to Second Lieutenant.
On 1st September 1944 he completed his tour of duty with them and was posted to 6OTU at RAF Silloth in Cumberland (now Cumbria) as an instructor and then later to the Advanced Flying Training School at RAF Newton in Nottinghamshire.
His final posting was to the Photographic Reconnaissence Interpretation at RAF Dunholme Lodge in Lincolnshire. He was demobilised on 3rd December 1948. He settled in Sheffield, Yorkshire but made many visits back to Poland. On one of these visits he died suddenly on 21st February 1995 in Lodz and is buried in the Military Cemetery in Lodz-Doly He was awarded the Cross of Valour three times.
Posted by ARCHIVE at 22:05 No comments: 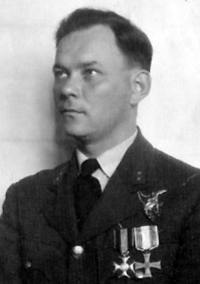 He was born on 9th July 1911 in Lwow and joined the Cadet School there on 1st September 1926, graduating in 1931 after which he enlisted in the Infantry Officers School in Komorow.

In August 1933 he was promoted to Second Lieutenant and the following month he took a glider course at Ustianowa in Southern Poland. He gained his glider pilot’s licence and immediately enrolled in the Aviation School at Deblin. In May 1934 he became embroiled in a dispute with a senior officer and was posted to an infantry regiment in Rzeszow. He languished there for over two years and was not permitted to return to Deblin until October 1936.


He was put on a navigator course and quickly re-established himself; he was promoted to Lieutenant on 19th March 1937. The following August he was posted to the 2nd Air Regiment in Krakow. On 16th June 1939 he was attached to 216 Bomber Squadron at Warsaw. He spent the rest of the summer training on the PZL37 Moose. The day before the war started his squadron was moved to the aerodrome at Podlodowie but he did not see action until 4th September 1939. His first task was to bomb German armoured units near Radom.


Three days later he was flying a reconnaissance mission when his aircraft was shot down by a Messerschmidt Bf109. He baled out and suffered second degree burns and leg injuries. He was taken, and almost lynched, by peasant farmers; he was only released when members of 41 Squadron appeared on the scene.


Regardless of his injuries, he returned to his squadron and was back in the air on 15th September bombing the Germans in the Brest area. Three days after that he flew into Chernivtsi airport in Romania (now Ukraine) and went via Ploiesti to Bucharest. He then travelled by train through Jugoslavia to Greece.


The next move was on 15th October 1939 when he boarded the SS Pulaski, an elderly vessel then owned by the British War Ministry, and sailed from Athens to Marseilles, France. He was based at Lyon-Bron from December 1939 where he began training but France collapsed before his squadron was battle ready and he was evacuated on 18th June 1940.


He made his way to Port Vendres on the Mediterranean coast and sailed on 20th June 1940 for Oran in Algeria and then overland to Casablanca in Morocco. On 6th July 1940 he boarded the SS Viceroy of India and sailed for Plymouth in Devon. This was a 19,700 ton passenger liner, requisitioned as a troopship and later sunk by U407.


Once in England he was sent to the Polish Depot at Blackpool and, on 14th September 1940 he was posted to RAF Bramcote in Warwickshire to familiarise him with British aircraft. From January to April 1941 he was at RAF Prestwick in Scotland on a navigation course and then on to 18OTU for operational training. On 7th July 1941 he was posted to 304 Squadron at RAF Syerston in Nottinghamshire just a few weeks after the squadron became operational.


His first operational flight was on 14th August 1941 to Boulogne, France. He then settled in to bombing Germany and occupied Europe until May 1942 when the squadron transferred to Coastal Command based at RAF Tiree in the Inner Hebrides, Scotland. Their new function was anti-submarine warfare, protection of allied shipping and harassment of Axis shipping.


He was killed on the way to an anti-submarine sweep when HX384 was struck by ferocious cross winds on 12th August 1942. It was blown over the cliffs by the runway at RAF Dale in Wales; the depth charges exploded and the whole crew died. He is buried at Newark upon Trent Cemetery. He was awarded the Krzyz Walechznych (Cross of Valour) by Air Vice Marshal Ujejski on 21st November 1941; he won this medal four times and was also awarded the Silver Cross of the Order of Virtuti Militari. He is buried in the Polish Military section of the cemetery at Newark on Trent in Nottinghamshire. 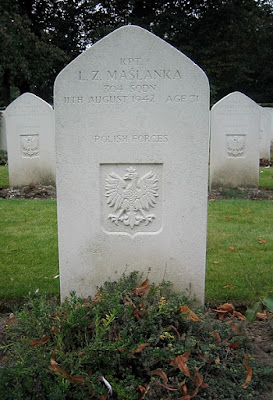 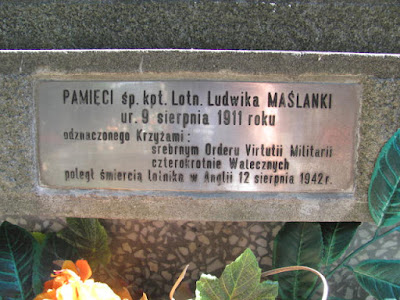