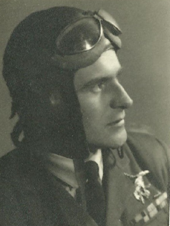 He was born on 31st March 1916 at  Rochaczew (which was in Russia at that stage in history), whilst his heavily pregnant mother was visiting friends there; he was the son of Pawel and Stefania Lipski.  He grew up in the Pultusk region of Poland as the elder of two sons, Leszek being the younger.  There are also unconfirmed reports that the family were very wealthy and extremely well respected  land owners in the area, employing hundreds of people.
On 4th November 1934, when he was 18, he joined the Air Force and between 1st February 1935 and 27th June of that year, he undertook a radio-telegraphy course, probably at Radom.  Presumably, as a career progression, he followed that up with a course in radio mechanics at the communications training centre CWL Zegrze near Warsaw – this lasted from 2nd January 1937 until 10th November 1937. 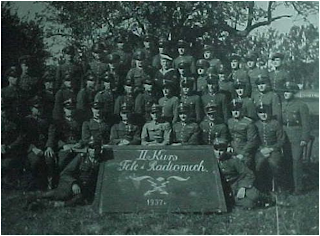 Radio-mechanics Course at CWL Zegrze, near Warsaw, 1937.  Bohdan Lipski (standing extreme right, second row).  No rank insignia visible
This may have been National Service, as there is no clear picture of what happened after this course.  However, he kept a diary of events from the outbreak of war and describes how he crossed the border into Romania on 18th September 1939; he stayed in that country until 18th December 1939 when he left for Syria, arriving there on Christmas Eve.
He remained in Syria until 15th January 1940 when he presumably boarded a ship for France where he arrived on 21st January.  There are no available details of his time there but he left France at the time of the capitulation, on 24th June 1940 and later arrived in England.
He qualified as an L/Ac wireless operator from No 2 Signals School at RAF Yatesbury, Wiltshire on 31st March 1941 – in spite of the problems with the serviceability of the Proctor aircraft (he also trained on Dominies).  Then, from 29th April until 6th June of that year, he attended No 4 Bombing and Gunnery School at RAF West Freugh, near Stranraer, Wigtownshire (now Dumfries and Galloway), in Scotland.  Later, from 7th-19th July 1941 he did radio training on Avro Ansons at RAF Bramcote near Nuneaton in Warwickshire.  Almost immediately afterwards, he carried out air gunnery training on Wellington Bombers also at RAF Bramcote, with 18 OTU. 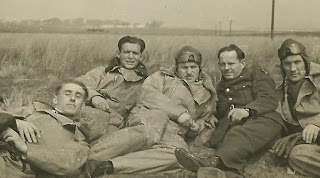 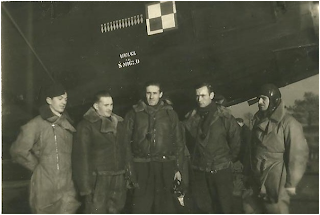 On 15th August 1941, he was posted to 304 Squadron at RAF Lindholme in South Yorkshire, where he completed 24 bombing missions, on the last of which his aircraft, Vickers Wellington Mk 1c, W5627 (NZ-B) was shot down by flak, near Chatel-Censoir, France on the return journey after bombing Cologne on the night of 28th April 1942.  He was a member of the crew of F/O Julian Morawski and was the only member of the crew to be taken prisoner – the others all successfully evaded capture and made it back to England. 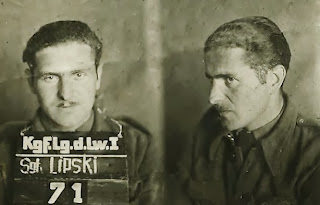 Sgt Bohdan Lipski    POW No 71
His diary reveals that on 1st May 1942 he was in Frankfurt and on 28th of that month he was in Stalag Luft III in Sagan, Germany (now Zagan, Poland).  By 6th   June, he was held at Stalag Luft I near Barth, Western Pomerania, Germany and on 5th November 1943, he was at Stalag IVb, Muhlberg, 30 miles north of Dresden, Germany.  He was still there on the night of 22nd/23rd April 1945, when the camp was liberated by the Russians, just over two weeks before the war in Europe ended.
The Germans wanted to round up the prisoners and march them westwards ahead of the Russian advance but the prisoners refused and the Senior American Officer is said to have persuaded the Germans not to force the issue as it would cause countless unnecessary deaths and injuries.  The German Officers surrendered  to him and promptly disappeared that night.  No doubt fearful of the treatment they could expect from the Red Army. 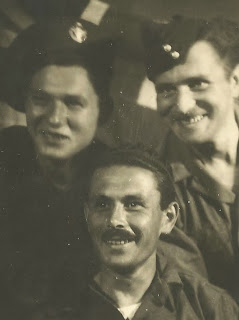 
On 16th May 1945, he left Halle, Saxony-Anhalt and travelled via Brussells to England, arriving at the Polish Depot at Blackpool, two days later.  From there it was a slow process of waiting for demobilisation.  He remained at the Polish Depot in Blackpool until he was transferred to RAF Cardington in Bedfordshire on 28th January 1947; this was to be the final move of his military career until he was demobilised on 14th February 1948.
His first job in civilian life was as a garage hand, employed by a fellow Pole V. Skwierkowski in the town of Warrington, Lancashire (now Cheshire).  By the time he met his wife, Stanislawa Sobieraj, he had moved to London and was working at the Royal Free Hospital.  They were married at the Town Hall at St Pancras on 23rd July 1949 and subsequently had three children before moving to Swindon in Wiltshire in the early 1960s, after which they had a fourth child.
Once there he worked in several engineering companies before settling down to work for R.A.Lister, who later became part of Hawker Siddeley, near Swindon.  He retired in 1981 and spent his time reading, fishing and enjoying his pipe with his favoured St Bruno tobacco.  He was a quiet, placid man who never took risks – perhaps not surprisingly after a tumultuous start to his life.  He died on 20th April 1984.
He was awarded the Order of Virtuti Militari, by General  Sikorski, and the Cross of Valour, by General Kopanski, at RAF Lindholme on 25th April 1942 – only three days before he was shot down.  His son claimed his uncollected British medals – the Air Crew Europe Star and the 1939-1945 War Medal, as well as the Bomber Command Clasp – in July 2013. 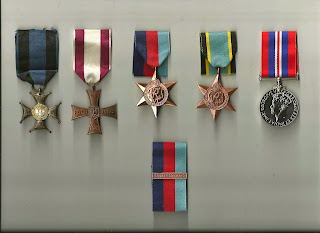 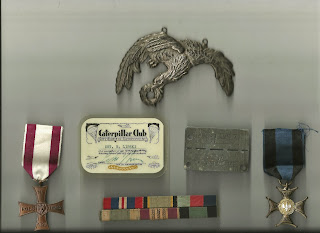 Souvenirs of War: Polish Airman’s Gapa, Cross of Valour, Virtuti Militari and Polish and British Medal Ribbon Bars.  The two central items are the Caterpillar Club Membership Card awarded to any airman whose life was saved by parachuting from a stricken aircraft, awarded by the Irvin Parachute Company and the POW dog tag for POW No 71 at Stalag Luft III at Sagan – home of the Great Escape
All photographs used in this compilation are ©Eddie Lipski and are used with his kind permission;
All photographs and documents are from the Lipski family collection

Posted by ARCHIVE at 00:45 No comments: Links to this post 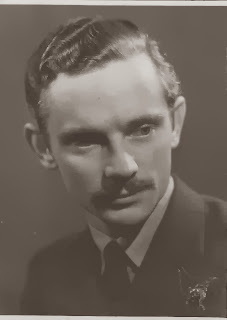 He was born on 23rd March 1919 in Bobrus near Wilno (now Vilnius, Lithuania) and in 1938 he joined the training school in Swiecie.  But because of the outbreak of war, he was unable to complete the course and was evacuated from his base in Moderowka to Romania.  His escape route is uncertain but he arrived in France on 30th November 1939 and sought a transfer to England.  This was granted and he arrived in England on 27th February 1940 and, after completing his basic training, began his aircrew training on 13th July 1941 and his pilot training two months later on 12th September 1941.


He finished the training at 34 Service Flying Training School at Medicine Hat in Alberta, Canada on 3rd July 1942.  He was then returned to the Blackpool Depot and was sent to 16 SFTS at RAF Newton, Nottinghamshire on 20th October 1942 and, to gain flying experience, he was sent to 5 Air Observer School at RAF Jurby on the Isle of Man.


On 15th May 1944 he was posted to 304 Squadron at RAF Chivenor in Devon and served with them until 21st November 1945 when he enlisted in the Polish Resettlement Corps at RAF Hucknall in Nottinghamshire.  He was awarded the Cross of Valour twice and the Air Medal.


After his demobilisation he settled in the Nottingham area, changed his name to Hope and worked in the textile industry.  He died on 9th March 2005 and was buried in Wilford Hill cemetery in Nottingham.
Photograph © Stefan Pietrasiewicz-Hope
Posted by ARCHIVE at 01:05 1 comment: Links to this post