According to his military records he was born on 11th September 1919 but his family tell me that he was born on that day but in the year 1920 at Antonowka near Kielce in Poland, the son of Jozef Slawinski and Maria Slawinski (nee Kozlowska).  After completing his education he trained as a fitter/mechanic before joining the Polish Army for his National Service on 28th August 1936.


He trained with 1st Air Regiment (Warsaw Regiment) and saw active service with them from the very first day of the September Campaign following the German invasion of Poland on 1st September 1939.  He fought through that campaign until 28th September 1939 when he was taken prisoner by the Russians at the defence of Warsaw.  Following this he was shipped to the USSR and held prisoner in Siberia until 27th September 1941 when he was released to join the Polish forces in the Middle East, under the flag of General Anders' Army following the negotiated release by Churchill and Sikorski.


From wherever he was held in Siberia, he made his way to Krasnovodsk and joined one of the heavily over laden tramp steamers to take him across the Caspian Sea to Pahlevi in Persia (now Iran), where he joined the British forces.


The following extracts from a much larger story will give some idea of the suffering they went through.  They are reproduced with full acknowledgement to Ryszard Antolak and Pars Times to show the condition of the Poles on and after reception in Persia (Iran).


A makeshift city comprising over 2000 tents (provided by the Iranian army) was hastily erected along the shoreline of Pahlavi to accommodate the refugees. It stretched for several miles on either side of the lagoon: a vast complex of bathhouses, latrines, disinfection booths, laundries, sleeping quarters, bakeries and a hospital. Every unoccupied house in the city was requisitioned, every chair appropriated from local cinemas. Nevertheless, the facilities were still inadequate.


At this time there were only 10 doctors and 25 nurses in the whole of Pahlavi.


In the clean area, the arrivals were channelled into a series of tents where their clothes were collected and burned. They were then showered, deloused, and some of them had their heads shaved in the interests of hygiene. As a result, women began to wear headscarves to conceal their baldness. Finally, they were given sheets, blankets and fresh clothes by the Red Cross and directed to living quarters.


Food provision was inappropriate. Corned beef, fatty soup and lamb, distributed by the British soldiers, caused havoc with digestions accustomed only to small pieces of dry bread. They could not tolerate the rich food, and a large number died purely from the results of over-eating.


Weakened with illness and badly undernourished, he survived all this and was fed, properly clothed and given medical attention in a tent city on the beach - the healthiest place due to the clean air and fresh breezes which discouraged the build up and spread of infections.  Here he came under British command on 1st April 1942 and was selected for the Air Force and shipped to Britain, reaching the Polish Depot at Blackpool on 10th July 1942.


He was posted to the Polish Technical Training School, probably at RAF Weeton which was part of the Blackpool complex, on 6th August 1942 and stayed there until 10th September 1942 when he was transferred to No 8 Air Gunnery School at RAF Evanton near Invergordon, Ross and Cromarty, Scotland to complete his training as an air gunner.


On 16th October 1942 he completed the course and was sent to 18 OTU (Operational Training Unit) where he was to learn British operational tactics and to form up with and familiarise with a crew with which he would work closely and build up trust over the following tour of duty.  Later, on 14th November, they were moved to 6 OTU at Thornaby on Tees to complete the course.  Finally, on 30th January 1943, the crew, Captained by Sgt S. Franczak, were posted to 304 Squadron at RAF Dale and, after a week's leave, took up their posting on 6th February 1943.  Three months later on 11th May 1943 he was awarded his Field Service Badge in recognition of ten active service missions.


As with all Coastal Command aircrews, he spent many long hours flying over featureless seas and this was as risky as it was boring.  Crews had to maintain concentration as these long flights were often at very low level.  They rarely made sightings of U-Boats but their presence kept these ships underwater and dramatically reduced the likelihood of torpedo attacks.


In spite of this, he had his fair share of excitement and danger: on 5th September 1943 his aircraft, Vickers Wellington NZ-M, was attacked by four Junkers Ju88 fighters and was badly shot up but none of the crew were seriously injured and all survived the wheels-up crash landing.  The following is the Official Squadron write up:


"The aircraft of which F/S F. Rybarczyk was first pilot encountered four Junkers 88's, one of which, in a combat which lasted 10 minutes, was severely damaged and was last seen diving in flames through the clouds.  This aircraft was claimed as destroyed.  The remaining three enemy aircraft attacked repeatedly but the Wellington maintained violent evasive measures and succeeded in reaching cloud cover.  Although extensively damaged, the aircraft made a successful belly-landing at base.  None of the crew was injured either in the combat or in the crash-landing, except that the Navigator, F/L A. CHOMKA, received a slight facial wound from a splinter from the astro dome."


On the night of 28th/29th January 1944 his aircraft came across a fully surfaced U-Boat and illuminated it with their Leigh Light before running in to the attack.  In the face of machine gunfire and heavy flak Waclaw (rear gunner) and the front gunner expended about 2,500 rounds whilst the pilot lined up to release six 250 lb torpex depth charges, the last two of which straddled the stern quarter of the vessel.  All return fire ceased and the submarine disappeared from the radar within about 20 seconds.  The nearer  of the two was seen to explode an estimated 10 feet from the vessel.  If not a fatal blow, this would have caused significant damage - no U-boats were reported sunk in that area on that night and it was too dark to see any evidence of debris. 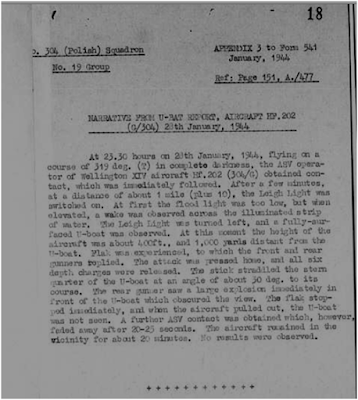 Official report to Admiralty on the attack on a U-Boat


His military career came to an end on 4th May 1944 (not 12th May 1944 as shown in his military records) when he was involved in a serious motorcycle accident in North Devon and was admitted to Tiverton General Hospital and was transferred the next day to the Princess Elizabeth Orthopaedic Hospital in Exeter.  On 25th May 1944 he was transferred again to the RAF General Hospital at Wroughton, near Swindon, Wiltshire and on 18th June 1944 he was posted back to RAF Chivenor near Barnstaple, Devon but it was a brief respite as he was re-admitted on 21st June 1944 to RAF General Hospital at Church Village, Pontypridd, South Wales.  Subsequently he was transferred to No 4 Polish General Hospital at Ormskirk in Lancashire where he stayed until he was finally re-posted to the Polish Depot at Blackpool on 1st August 1945.  After this he was discharged to the Polish Resettlement Corps where he spent two years training for civilian life.


He met Thelma Partridge in Birmingham, just outside the Cathedral, and eventually they married and had four sons - Roy, Adrian, Jan and Alan.  After leaving the Air Force he went to work as a storeman for Electrical Power Engineering in Birmingham.


During the course of his military career he was awarded the Cross of Valour, the Virtuti Militari and the Polish Air Medal as well as British campaign medals. 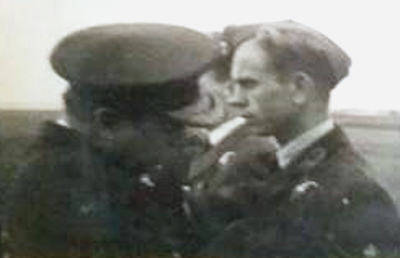 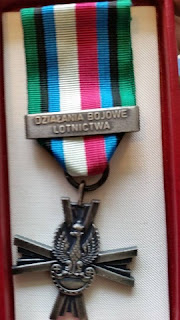 Post-war honour for courage
Sadly, he died in Birmingham on 24th February 1972 and his interment took place at the Yardley Crematorium.

Posted by ARCHIVE at 23:37 No comments: Links to this post