STANISLAW BOCZKOWSKI - HIS VERSION OF THE CRASH OF R1268

When he was posted to squadron 304, there was a brief period of time where nothing was happening. To make the best use of such time he was told to report for a training flight with the crew of R1268 (NZ-T). The purpose was to continue training of the two navigators attached to the flight as well as to allow Stanislaw Boczkowski to become more familiar with that specific aircraft.
The plan was for a four hour flight and the weather was not too bad when we took off. Flying Officer Waroczewski piloted the plane for the first two hours and then Stanislaw Boczkowski took over. After a few hours in the air and while Stanislaw was at the controls, the weather got worse and the navigators lost their bearing. They were to practice flying on instruments only. The flight had no radio operator and therefore could not get a radio fix on their position. It was decided to descend and check their position by map and visual sighting.
The aircraft went through the clouds and it began to ice up on the wings. There was also trouble with the engines as they were running unevenly. One navigator took Stanislaw's position and he sat in the radio operator's position; the other navigator (Kostuch possibly?) went to the forward bomb sight. Both positions offered a better view of the land being overflown.
The cloud cover at this point was quite low and heavy ice had formed on the wings. The crew knew that the ‘plane was going to go down one way or the other. Waroczewski piloted the plane down as best he could with Stanislaw still in the radio operator’s seat and the navigator sitting in his seat. Not surprisingly, Stanislaw does not remember the crash itself.
After the crash, Stanislaw climbed out through the nearest hole in the fuselage. He thought that he had lost his right eye as he could see nothing out of it. He clambered over to to the pilot who was badly hurt but conscious and still strapped into his seat. Waroczewski asked to be pulled out of his seat but Stanislaw could not manage it due to his injuries. All of Stanislaw's ribs were broken and the blindness in his right eye was caused by a skin flap from his forehead covering that eye.
The navigator who had taken his seat was no longer there - Stanislaw didn't know where he was. The navigator who had been in the bomb bay was lying quite a way in front of the wreckage of the nose of the aircraft. He survived but I think that he never returned to flying.
People came as, well as an ambulance, to help; Waroczewski was placed on a flat surface - possibly a door - and taken to a nearby farm. Stanislaw was taken by ambulance to a nearby RAF station infirmary where he was treated for four days and then sent back to his own squadron - 304. He was given 10 days leave and immediately headed out to visit an adjoining squadron but was called back the next day and told to report immediately to join 300 squadron.
This is remarkably close to the version of Tom Lamb, the eye witness on the ground, but obviously was written with more real knowledge of events.
Posted by ARCHIVE at 01:20 No comments: Links to this post

If anyone can identify any of these parts, please do so - you could save my sanity!
Posted by ARCHIVE at 22:40 No comments: Links to this post 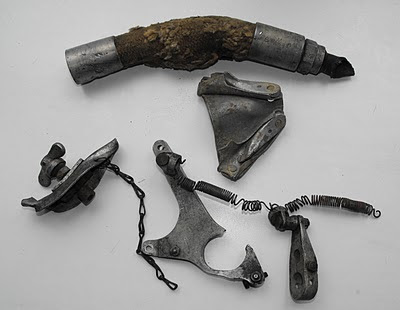 The items shown are parts of R1268 that were retrieved at the time of the crash and have not spent the last 71 years in the ground.  They were collected by a local after the recovery crew had left and have been in storage in a private collection ever since.  The four pieces are well marked and should be easily identifiable as being from a Wellington 1c.  I acquired them from a man who lives only four or five miles from the scene of the crash.  R1268 is the only Mk 1c EVER to crash in this area.  I will try to make a positive identification of the parts and their functions and identify them here later.
Posted by ARCHIVE at 16:41 No comments: Links to this post

In the statistics for this blog, I note that there are a lot of views from Germany.  I would like to make it very clear that my intention is to pay respect to the Polish airmen who fought for Britain.  I do not intend any disrespect to the Luftwaffe or its personnel and I appreciate that there were a large number of very brave men who fought amongst its numbers.  Never forget that Douglas Bader and Adolf Galland remained very good friends for the rest of their lives.
The war is over and it is time for all men, on both sides, to accept that and to acknowledge the bravery of friend and enemy alike.  If you are a German and can tell me anything about actions in which Polish airmen were involved, please do.  If you can tell me which fighter pilot shot down a Polish bomber, that adds to the historical information - it does not create enmity.  If your father was the German soldier who shot my father - c'est la guerre - he recovered and lived another 50 years!  If my father was the unknown enemy and shot your father - I'm sorry, but there's nothing anyone can do about it.
If your ancestor was a Luftwaffe pilot and you have useful information, please talk to me.  I promise you that I hold no grudge and I do not hate Germans!  I know that it is very difficult for German citizens to talk about the war, but I assure you that nothing you say will be used without your permission.
Posted by ARCHIVE at 16:08 No comments: Links to this post