I am very happy that this blog has been well received and I do appreciate sensible comments.  If you decide to comment, please leave contact information or please also email me directly on NEVandDOREEN@aol.com  I only use this email address as a spam filter but I will reply to you with a proper email address for sensible discussion.  I have had three or four comments in the last week that I would like to discuss with the posters but cannot because I simply can't contact them.
Posted by ARCHIVE at 22:56 No comments:

Thank you for your most interesting comment on Kazimierz Czetowicz.  I would really like to ask you a few questions about him but you have left no contact details.  If you read this, please email me directly on NEVandDOREEN@aol.com You may be surprised to know that I was working in Southgate at the time of his death and I am so disappointed that we never got a chance to meet.  I think the award you mentioned was the Order of Polonia Restituta or it may have been the Order of the White Eagle.  Either way, he deserved it; he never asked his men to do anything he would not do himself and he won at least six Polish or British gallantry decorations during the war.
Posted by ARCHIVE at 22:45 No comments:

Matt - you could try www.aircrew-saltire.org/lib172.htm
Dr Diana Henderson interviewed him before he died and she may be able to put you in touch with his son.  She is a very knowledgeable lady and very approachable
Posted by ARCHIVE at 20:21 No comments:

Further to my last posting, R1268 crashed 70 years ago tomorrow - some coincidence that you contacted me now!  I have visited the site and I have an eye witness report and a sketch of the scene.  I would truly love to have your father's version of the story.  Although the eye witness was only a teenage boy, he went on to  become a prominent artist and he too is still alive.  This was the first aircraft lost by 304 Squadron during World War II.
Posted by ARCHIVE at 02:49 No comments:

To the person who has just responded to my February 2010 posting.  Please get in touch with me directly.  This site would not exist at all if it were not for your father and three of his fellow crew members.  They were the crew of R1268 which crashed less than 5 miles from where I am now sitting and started off all my research.
This site is only the background material for a tribute that I am now writing and both you and your father would be able to help me to give him a better entry in that tribute - a memorial that he so rightly deserves and to do it in his lifetime would be something special as I believe he is the last surviving member of that crew
Posted by ARCHIVE at 02:28 No comments:

To the person who added an anonymous comment to my posting on Tadeusz Blicharz.  I am pleased you liked it and please feel free to forward my email address to the museum at Zagan.  Thanks also for the link.
Posted by ARCHIVE at 01:35 No comments: 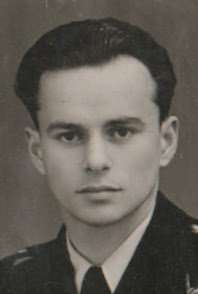 He was a pilot, born on 1st February 1915 in Krakow and trained at the Air Force Academy at Deblin between 1935/39; he was in service, on the outbreak of war, with 21 Bomber Squadron as a cadet pilot flying PZL23B Karas during the September Campaign.
He escaped from Poland via Romania and served with L’Armee de l’Air in France prior to coming to England; this photograph was taken in Toulouse in 1940.
After his arrival in England he was sent for operational training before being attached to 304 Squadron fling missions mostly over Germany. Whilst returning from a raid on Manheim, On board Wellington R1215 on 8th November 1941, the aircraft experienced problems with its navigational systems and the pilot attempted to land his plane on an airfield in Belgium. He successfully landed at St Trond near Liege, which was a Luftwaffe fighter base. The crew all survived and were made Prisoners of War, but not before destroying all papers that might be useful to the Germans and then setting the aircraft on fire causing the fuel tanks and ammunition to explode.
He was held in Stalag Luft III at Zagan in Poland and wrote an excellent narrative of the events leading up to The Great Escape and its aftermath, including the return of the ashes of the executed escapees – including his fellow crew member, Jery Tomasz Mondschein. This, and much more can be seen on http://www.tedblicharz.art-video.pl/ which is an excellent website created by his nephew Andrzej Kalus.
He was awarded the Cross of Valour, for bravery in action, by Air Vice Marshal Ujejski on28th June 1941. He also won the Order of Virtuti Militari and the French Croix de Guerre with two stars for mentions in dispatches, the Cross of Valour three times and various Polish and British campaign medals.
He survived the war and emigrated to San Francisco, California, USA; he was last heard of in Paradise, California, USA in 1999 but it is now known that he died there on 16th March 2010; he was cremated in Martinez, California and his ashes were returned to the Powazki Cemetery in Warsaw for burial on 23rd September 2010.
Photo courtesy of Andrzej Kalus

He was a Canadian, born in Revelstoke, British Columbia on 14th March 1915 to English immigrant parents. After his parents separated he was brought up by family members in both Canada and England. He was educated in Warwickshire, England but later enrolled on an agriculture course at the University of Manitoba, graduating in 1935. That same year he enrolled in the Royal Air Force and was a member of the RAF Guard of Honour at the Cenotaph in London on 11th November 1935.
He trained as a navigator and a wireless operator/air gunner and flew in Bristol Blenheims and Vickers Wellingtons. At the outbreak of war he was training student navigators but he transferred to 304 Squadron in November 1940 as a member of one of the British liaison crews.
He was the only survivor of the crash of Wellington R1473, shot down by flak on a mission to bomb Bremen on 9th May 1941. He became a Prisoner of War and was interned in Camps 18A and 357 amongst others in Germany, Poland and East Prussia.
He survived the war and returned to Canada in 1946 and worked as a telegraph operator for the Canadian Pacific Railway out of Vancouver, British Columbia. He was married on Bainbridge Island, Washington, USA in 1952 and moved home to Birtle, Manitoba, Canada. He became a farmer until his retirement in 1979. He died in Birtle on 9th June 2006.
Photo courtesy of Chris Kropinski
Posted by ARCHIVE at 16:32 2 comments: