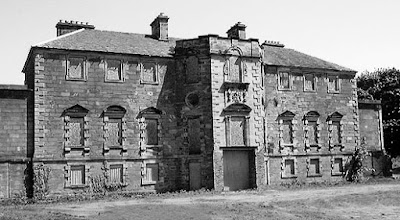 This is Archerfield House at Dirleton, North Berwick, East Lothian.  It is now an exclusive hotel but this picture was taken in the late 1950s or early 1960s when it was in a state of dereliction.
During WW2 it was taken over by the military but can anybody tell me if that was the Polish Army?  I believe that this, or part of it, was used as an Officer Training School for no more than eight months starting in December 1943.  The school was run by the Polish Army but also catered for the Polish Air Force and I am interested in Course No 6 which ran from May - August 1944.  This was possibly the only Air Force course hosted here as I believe it was only an interim arrangement between the move out of Auchtermuchty, Fife and the move in to Crieff, Perthshire.
If anyone has any information please contact me direct on nevillebougourd@gmail.com﻿

Posted by ARCHIVE at 02:55 No comments: Links to this post