Here is a second batch of 304 Squadron men for whom I have little or no information.  There must be someone out there who has information on at least some of them.  If you can help, please contact me on neville.bougourd@gmail.com

Two of the parts shown in my earlier post have now been identified; the following information comes from John Lattimore who worked on the Loch Ness Wellington and has considerable expertise in this field.
He states "...the upper item in your photo is the remains of a small fuel hose with a small section of rigid pipe still attached, the other end fitting being missing. This can be identified as a fuel hose due to the outer braiding being made of fabric and the end fittings are not heavily swaged. Had this been a hydraulic hose the braiding would have been of wire and the end fittings more heavily swaged." 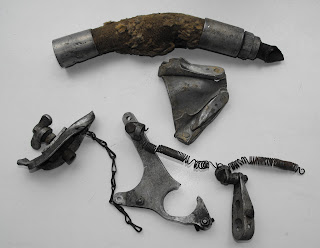 "The second item in your photo, a small roughly triangular piece of metal with two items riveted to it is almost certainly the remains of one half of a severely damaged double wishbone joint used to attach the geodetic structural members to the  tubular longerons or other tubular wing or fuselage members. There are several hundred such joints on the aircraft so once again specific identification is impossible."
The second item is shown, undamaged and in situ (this one is on the Loch Ness Wellington) in the photograph below. 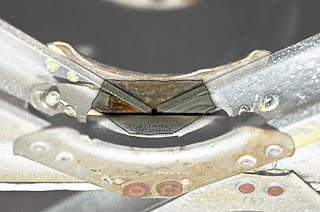 Posted by ARCHIVE at 16:34 No comments: Links to this post