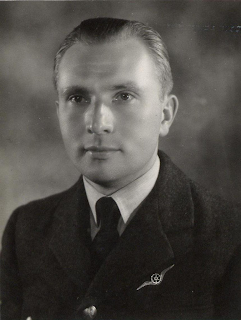 Michal Stefan Pienkowski was born on 6th April 1914 in Lvov, Poland (now Ukraine). His father died in 1916 – a family story is that he was executed for his political views and espionage, as he was a supporter of the Austrian government.  His mother, Maria Sadlak, had independent means and was a landowner and the family  believe that he had quite a privileged upbringing - he certainly had horses and was taught to speak English, French and German fluently.  He was also taught to sew and would, later, tailor his uniforms to make them fit better!  Later still he used this skill to earn a living.

He studied Chemistry at Warsaw University and joined the Polish Air Force in 1937, after completing his studies – this was his compulsory military service.  At the end of the September Campaign he crossed the border into Romania where he was disarmed and interned for three months.  The family sent him money which he used to bribe his way out of the camp and he would almost certainly have had assistance and false papers from the Polish Embassy in Bucarest.
After his escape from the internment camp, he made his way, overland via Jugoslavia and Italy to France and then across France to Lyon-Bron where he rejoined the Polish forces in exile in January 1940 although his Identity Card was issued by L’Armee de L’Air on 21st May 1940. 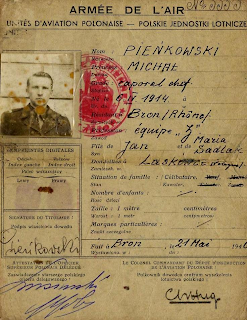 On the French capitulation, he made his way to the coast, almost certainly to St. Jean de Luz, just on the French side of the Pyrenees where he boarded the ill-fated SS Arandora Star and set sail for Liverpool, where he landed on, or about 28th June 1940.  He was transferred to the Polish Depot at Blackpool and formally enlisted with the Polish Air Force under the operational command of the RAF on 5th August 1940.
After initial training and familiarisation with British equipment, he served as an interpreter and then with 304 Squadron for the rest of the war, later transferring out to become an interpreter and an instructor at technical training schools.  Finally, he served with the Polish Resettlement Corps until his discharge on 9th June 1947 from RAF Dunholme Lodge.
He settled in Derbyshire where he married and had three children and earned his living as a tailor until he had saved enough money to open a shop known as Michael’s Stores.  Later he was the Sub-Postmaster at Duffield, Derbyshire for 17 years before retiring to Staffordshire where he ran a small-holding caring for animals and growing flowers and fruit. 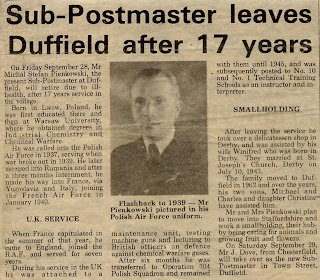 He died in 1985 from pneumonia which he contracted during the war and had plagued him all his life.  There is much more to come on this story.
Posted by ARCHIVE at 00:14 1 comment: Links to this post

I was recently contacted with the following story, which I have reproduced in the lady’s own words:


My name is Sylvia Barnes (nee Durent).  At the time of the aeroplane crash, I was living at West Edmondsley Farm with my Great Uncle and Great Aunt who ran the farm.  Their names were John & Isabella Langton (known locally as Jack & Bella).


On 14th December 1940, we were listening to the one o'clock news; the weather was dreadful, torrential rain and poor visibility. I was looking out of the window and saw a huge aeroplane dropping into the trees (the wood) at the bottom of the field behind the farm.  My uncle and a farm worker ran down to see what had happened.  Apparently my uncle John Langton pulled the pilot from the cockpit and sent the farm worker to fetch some doors to use to get the airmen up to the farmhouse.  By this time other people from the village arrived.  The injured Polish men were brought into the large kitchen and one looked like his legs were broken and the one I spoke to had a big 'hole' right near his eye (Jan?).  My aunt got some blankets to cover the injured airmen (she was a St John's Ambulance member) and made them as comfortable as she could.  Our family doctor arrived to do what he could (Dr Muckergee) until the ambulances arrived.  One of the airmen had brought up some maps and other objects which had been put in the dining room.  My aunt sent me there saying I had a very important job to do, to look after everything in the room and not let anyone into the room until the police arrived.


I watched through the window and saw more and more people and cars arrive and they parked on the field in the front of the farm making it difficult for the ambulances to get up to the back of the house. There were so many people just looking and getting in the way.


Eventually, I was told by my uncle that the stretchers had to be lifted out of the kitchen sash window into the ambulance and the airmen were taken to hospital.


A group of airmen, the 'crash gang' I called them, arrived to stop people interfering with the plane's wreckage.  The two officers with them slept in one of the farm bedrooms and the others (when they were off duty from guarding the wreckage until it was removed) slept on the floor in the kitchen and back kitchen. These airmen peeled the vegetables and helped in any way they could and we gave them their meals with us.  A trestle table was set up in the kitchen and the men had their meals with us even on Christmas Day.  I remember coming down early on Christmas morning and stepping over the sleeping men to get to my presents.  It had snowed and they built me a huge snowman and gave me small gifts and made a great fuss over me (I supposed they were missing their own children).


In the evenings the airmen off duty would come into the dining room and play the piano and we all sang songs and toasted teacakes on the toasting forks in front of the roaring open fire.


For me, as a child of 7 years, it was the most memorable experience I have ever had and often told other people all about it. I shall be 80 years old in Novemeber [2013]and have never forgotten the events of that day and the weeks afterwards or the brave Polish airmen who were injured in the crashed aeroplane.


When they were well again, three of the airmen came back to the farm to thank my aunt and uncle. The following year 2 came back and after that we used to get a Christmas Card from them. I don't think my Aunt and Uncle heard from them after the war.


Note: The man with the hole near his eye was Sgt Stanislaw Boczkowski, who must have looked frightening to a 7 year old girl, but that was just a flap of skin and was negligible compared to his other injuries.  He is still alive today and living in Canada.  One of the men was later killed in action, another was killed in a road accident later in the war.  The others both won the Virtuti Militari – Poland’s highest award for gallantry and both survived the war.
Posted by ARCHIVE at 17:12 No comments: Links to this post