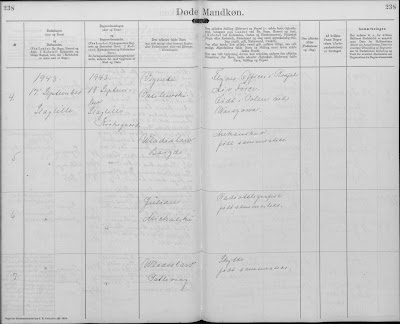 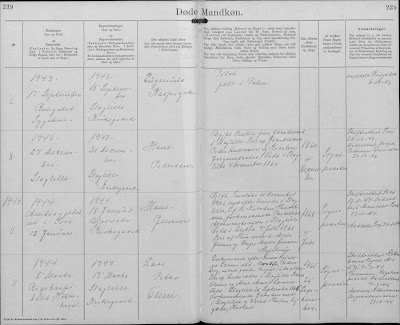 Pages of entries in the Church Records at Slagille, Denmark
added later by the parish priest 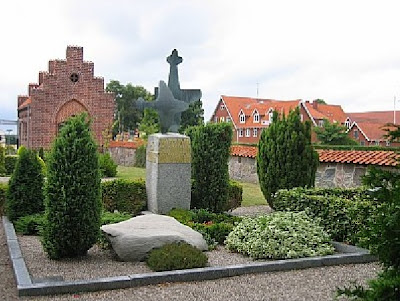 Memorial Garden to those killed at Slagille on BB309 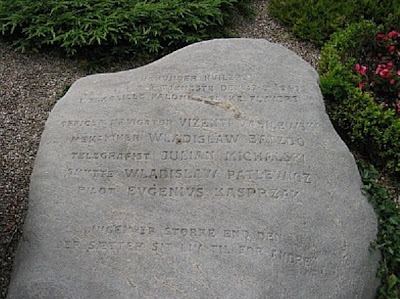 Memorial stone to those killed on Halifax BB309 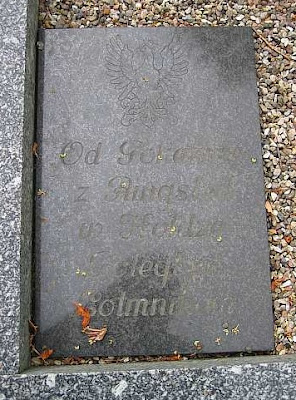 The present Polish graves at Slagille
These are more pictures provided from his own collection and website, through the courtesy of Soren Flensted, to whom I am extremely grateful.
Posted by ARCHIVE at 21:11 No comments: Links to this post


Without wishing to detract from the incredible courage and resourcefulness shown by the men of many nationalities who flew in 138 Squadron, a considerable number of them were also former 304 Squadron aircrew.   For that reason, I feel justified in including this story as six of the seven man crew had previously served in the squadron and their individual stories have already been featured on this site.
Halifax Mk II BB309 (NF-T) left RAF Tempsford at approximately 18.29 hours on 17th September 1943, its mission - Operation Neon 3 -  was to drop off two agents at Drop Zone Obraz 108 in Poland.
The agents were 2nd Lieutenant Miroslaw Kryszczukajtis (Szarzy) and Bernard Augustyn Wiechula (Maruda); they were successfully delivered and BB309 was approximately  half way home when it was attacked by a German Ju88c night fighter.  This fighter was crewed  by Pilot Leutnant Richard Burdyna, Obergefreiter Leo Klotz and Obergefreiter Fritz Merten of 11/NJG 3; it was directed to them by the Radar Station Seehund  at Tybjerg, Denmark.
The Halifax was damaged by fire from the Ju88 and the pilot, F/Sgt Tadeusz Miecznik, attempted a forced landing in fields near Slagille.  He touched town at about 04.45am, but struck a house, and the impact, and the fierce fire that ensued, killed five of the crew and five civilians, including two children, on the ground.  For the crew of the Ju88, this was their first “kill” of the war; they were all aged between 20-22  and, fascinated by the results of their work, they circled at low level then crashed into trees and burst into flames.  There are different versions of how the Ju88 crashed: return fire from the Halifax; striking power cables; striking trees and the fact that it was a very dark night with no moon.  The latter was probably German propaganda and is obviously implausible because of the light given off by the fire alone.  The story, as told, was researched by Soren Flensted and the late Anders Bjornvad, both of whom are of impeccable credentials and spent many years researching the story “on the ground.” 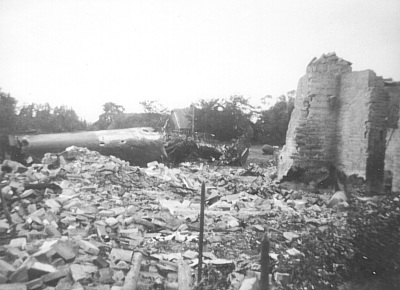 The Wreckage of Halifax BB309 (NF-T) and the farmhouse at Slagille, Denmark

In the space of just a few minutes, thirteen people were dead or mortally injured, one member of the Polish aircrew (Sgt Roman Puchala) escaped unhurt, one member of the crew (F/Sgt Tadeusz Miecznik) was badly injured and six people in the house escaped virtually unharmed.  The injured were all taken to the nearby Ringsted Hospital where all but F/Sgt Miecznik died later the same day; he later escaped, evaded and, apparently, “evaporated” as he seems to have disappeared from the record.  Any help with a photograph of him and/or news of what happened to him would be most welcome.


The German forces behaved in a way that was neither brutal nor inhuman but was thoughtless, to say the least, towards the non-German victims.  The Luftwaffe crew were taken to Copenhagen and buried with full military honours.  The dead Polish airmen were buried, with indecent haste, in shallow graves in the local churchyard at Slagille, as were the innocent civilians (albeit in normal graves).  One of the surviving crew members became a POW and the other escaped and was taken to neutral Sweden by the local resistance organisation, from where he is believed to have been returned to Scotland.
The Innocents: the civilians


In the early hours of that fateful morning, the crippled bomber hit the ground and skidded for several hundred metres before slamming into the farmhouse, on the Stockholtevejen road near Slagille, occupied by the family of a farm labourer, L. Christensen, who was killed, along with his wife, mother and two of their children.  This happened in the fire that followed the crash, when the remaining aviation fuel ignited.  Miraculously, the other five children and one grandchild escaped unscathed.  The civilian dead were respectfully buried in the churchyard at Slagille.


Flight Sergeant Eugeniusz Pawel Kasprzak was badly burned in the incident and was taken to the Hospital at Ringsted, where he died later that day.  Flight Lieutenant Wincenty Wasilewski, Flight Sergeant Julian Michalski, Sergeant Wladyslaw Patlewicz and Sergeant Wladyslaw Barzdo (the only member of this crew not to have served in 304 Squadron) were all killed at the scene.  These men were unceremoniously buried, in a shallow grave, at three o’clock in the morning on the day after the crash.
﻿


Sergeant Roman Puchala survived the crash and jumped from the aircraft before it hit the farm house; he immediately ran away across the fields, where he bumped into the wife of Niels Rasmussen, who was coming to investigate the crash.  She was born in Poland and was able to talk to him in his own language, before arranging for him to be fed and have a few hours sleep.  The Germans made a thorough search of the area and found him on the farm.  He was initially taken to Dulag Luft, a transit camp for airmen, near Frankfurt where he was initially interrogated before being sent on to Stalag Luft VI at Gross Tychy, near Tychowo in Poland.  His final move was to Stalag 357 at Fallingbostel, Lower Saxony; his POW number was 539.


His son informed me that he survived the war and died in Mansfield, Nottinghamshire in 1997, aged 80.


Flight Sergeant Tadeusz Miecznik was the pilot, and the only other survivor from the aircrew.  He was taken to hospital for treatment of his broken left leg and right arm.  With the help of the Danish Resistance, he was able to escape from the hospital at Ringsted, he was later taken to Sweden and ultimately evaded the Germans and made it back to Great Britain and is believed to have survived the war, but little else is known about him.
The Axis airmen:
The Luftwaffe night fighter, a Junkers Ju88C6 serial no 360167 from IV/NJG3 was piloted by Leutnant Richard Burdyna, born 19th June 1923 at Muhlhausen and died at the scene of the crash.  His crew members were Obergefreiter Fritz Merten, radar operator, born 26th July 1921 at Berlin-Lichtenberg and Obergefreiter Leo Klotz, born 15th November 1921 at Lahbehn- Lauenburg.  They both survived the initial impact but died later the same day at Ringsted Hospital.


This was reportedly their first kill and they were circling the area, fascinated by the carnage below, when their aircraft struck trees or a high voltage power cable (reports vary) and crashed in flames in the nearby Bjernede Forest.  The official version was that it was a very dark night; this is clearly propaganda as the flames from the initial impact would have lit up the night sky.  They were taken to Copenhagen and buried in Vestre Cemetery.


The parish priest, Svend Jacobsen from Slagille, was horrified when he heard from the grave digger that soldiers of the Wermacht had buried the dead airmen in a very shallow grave in the churchyard, without a Christian prayer or ceremony; this was done at 3 am on the morning after the crash.  He wrote to the Bishop asking that the Germans give him the names of the dead airmen so that the parish records could be kept in order.  He also arranged for the airmen to be given a decent burial in coffins and in a grave of the proper depth.  He conducted the ceremony which included a Latin prayer and a prayer in English.  The funerals were paid for by the Danish shipping magnate A.P. Moller, founder of the Maersk Line and the grave was strewn with fresh flowers and the funeral well attended by the local people. 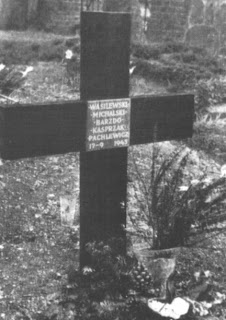 The first proper grave, paid for by AP Moller
On 2nd October 1943, Svend Jacobsen was allowed to visit the wounded pilot in Ringsted Hospital. It is known that they discussed the incident but Tadeusz Miecznic was careful with the truth and told him that they had been bombing German targets in Poland; he did not mention that they had dropped weapons, supplies and agents there.
When the Germans felt that Miecznic was ready to be moved to a Prisoner of War Camp, Dr  Lenler-Eriksen  contacted Marius Petersen, a local ironmonger, asking whether he would be able to  help Miecznik to escape, before he was to be transferred to German custody. Marius Petersen thought it might be possible. He contacted Jorgen Wiboltt ,who was then head of the Zonen Ringsted Fire Station, with a view to making the arrangements.  It was obvious that the airman had to get away from the town immediately after the escape and so Wiboltt went to Copenhagen to make arrangements to get him  to Sweden but without a result.  It seemed that no one was able to help.


However, a little later Wiboltt was contacted by Kisling at Zonen Osterbro Fire Station, who promised to arrange transport to Sweden, if the airman was brought to Copenhagen. The  escape was planned for 7th November 1943 providing Miecznic was physically able to do it.  Just before 10 p.m. Wiboltt and  Petersen placed a ladder against the airman´s window and helped him out of the window and down the ladder into the grounds.  The airman was given a civilian coat, and he managed to walk unaided  to the Zonen Fire Station – a distance of something like 600 metres.  Wiboltt drove him to Copenhagen and passed him into Kisling’s care.
Shortly afterwards the Polish airman was delivered into the care of Police inspector Thormod Larsen, then a young police officer in Elsinore.  The prepared story was that Miecznic was to be transferred to the hospital at Hillerod for more treatment after which he was to be handed to the Police for transfer into German custody.


The resistance had about 14 suitable places from which they were able to move escapees and, on this occasion, they chose Espergarde code named FA  At that time the courier connection to Helsingborg was totally safe and fast.  When the boat came, the helmsman was Erling Kiaer and Miecznic was carried on to it by Thormod Larsen and accountant Ove Bruhn, who then worked at the Police Station in Elsinore.  The airman then made the short journey to Sweden and was soon repatriated to Britain – although the route is uncertain.


My thanks to Soren Flensted for a great  deal of information and permission to use photographs from his collection and his website www.flensted.eu.com.
Posted by ARCHIVE at 19:17 No comments: Links to this post