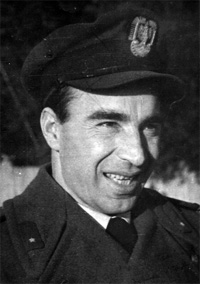 Stanislaw Szewczuk was born in the village of Prusy, near Lviv, on 15th April 1913.  He was one of eight children, three of whom died in childhood, born into a humble family.  However, he completed his education, graduating from the National Gymnasium Hetman Stanislaw Zolkiewski at Lviv in 1931.  He followed this up with a course of training in mechanical engineering at Lviv Polytechnic, specialising in structural aviation.  He supplemented his income by tutoring other students and graduated in June 1938.
He then enlisted for his compulsory military service and undertook a course at the Szkole Podchorazych Reserwy Saperow at Modlin, where he completed his basic training.  On 1st January 1939 he was posted to the Reserve Officers School of Aviation (Technical Division) in Warsaw, where he trained to a very high level, with the rank of Cadet Sergeant.
His specialised training was in the construction of engines and airframes and, after completing this course he was posted to 6th Air Regiment in Lviv on 24th August 1939.  In that year, he married Irene Bryniarska but the impending war dealt them a severe blow as she was deported to Kazakhstan when the Russians invaded Poland and he was fighting in the west; they were separated until 1947.
He was active as a platoon leader during the September Campaign and was involved in the evacuation of airmen and equipment, crossing from Serafincach, Poland (now Ukraine) into Romania on 17th September 1939, when Russia entered the War.  On 4th October, he arrived in Bucharest and reported to the Polish Embassy where he helped other airmen and engineers to escape to the west.  On 24th October, he was given a visa, money and travel documents to take him, via Jugoslavia and Greece, to France where he arrived on 4th November 1939 and reported to the Polish authorities there.  He was sent to Le Bourget aerodrome just north of Paris, which was one of the Polish Air Force mustering points at that time; he later moved to the air base at Lyon-Bron.
As an engineer he was retained in France, whilst the aircrew were mostly sent to Britain.  He went to the Olaer factory at La Couronne, working on major components for the chassis and hydraulic systems on the Dewoitine D-520 aircraft.  He worked there until June 1940, when it was obvious that France would capitulate.  He did not manage to escape and was interned in a camp at Caylus, Tarn-et-Garonne Department in the Midi-Pyrenees region, guarded by the Vichy authorities.  Later he was moved to a hostel in Aix-les-Bains in the Rhone-Alpes region of South East France.  In 1942 he moved to Clermont-Ferrand in Central France, where he worked in various civilian jobs in order to live and later still, he was moved to Grenoble - also in the Rhone-Alpes region.

In November 1942 he was caught trying to cross the border into Spain and was taken to the internment camp at Gurs near Pau in South Western France, where the main problem was the shortage of food, but he survived because he worked in the kitchens.

The camp at Gurs was a collection of 382 cabins, each of which was windowless and without sanitation; they were constructed of thin timber covered with tarred canvas which easily leaked, allowing the rain to enter.  They were very cold in winter and had to house up to 60 people in a 25 square metre area - sleeping on palliasses made from straw filled sacks.

Toilet facilities were primitive closets and, when full, the tubs were taken out of the camp on horse drawn carts.  Fortunately it was not a particularly secure camp and the treatment of the prisoners left much to be desired, although it was not brutal.

He was then drafted to the Organization Todt, a paramilitary slave labour group, specialising in building military fortifications.  He was employed on projects near the Franco-Spanish border and managed to escape through Spain, via Madrid to Gibraltar.  Here he was provided with identification papers and travel documents and put on board ship for England.  Arriving in late September 1943, he was sent straight to the Polish Depot at Blackpool.

On 28th October 1943 he was allocated to 58 Maintenance Unit based at Newark upon Trent, Nottinghamshire, whose function was to recover crashed or damaged aircraft and to repair them or salvage any re-useable parts or equipment.  He was transferred to RAF Manby, near Louth in Lincolnshire on 28th April 1944, where he trained at 1 Air Armament School, qualifying as a Technical Officer on 3rd September 1944 and being commissioned as a Flying Officer then or shortly afterwards, following his posting to 304 Squadron.  This was at RAF Benbecula in the Outer Hebrides on 12th October 1944 - just in time for him to suffer the poor conditions of damp Nissen huts, gale force winds, severe rain and snow storms of a Hebridean winter!

Here he was responsible for the maintenance and repair of Wellington GR XIV bombers in their Coastal Command role, flying far out over the Atlantic on anti-submarine patrols, air-sea rescue missions and harassing enemy shipping.  He stayed there until the Squadron returned to St Eval in Cornwall on 5th March 1945.  Their duties were exactly the same, but their territory was now the Irish Sea, the Bay of Biscay and a much more southerly area of the Atlantic Ocean.  Cornwall could be just as bleak in the winter but at least they were on the mainland and could visit neighbouring towns.  However, the weather was improving and spring made flying and living conditions easier.  For about a month after the end of hostilities, they were still active in hunting down U-Boats whose crews refused to surrender.

On 6th June 1945, the Squadron was transferred, to Transport Command for duties including flying passengers and freight in unarmed aircraft, making his position unnecessary and he was transferred to the Aircraft and Armament Experimental Establishment at RAF Boscombe Down at Amesbury in Wiltshire.  He was awarded the Air Medal for outstanding non-combative service and left the Air Force, returning to Poland in September 1947.

He lived in Sopot, on the Baltic Coast near Gdansk, where he worked with agricultural machines but in 1949 he began work teaching in the Technical University of Gdansk.  He worked simultaneously  on the Gdynia II and Olowianka-Gdansk power installations as an inspector of the construction work.  However, in the latter part of 1950, he was denounced andarrested by the Secret Police and was held in prison for several months without a trial or conviction.  During his time in prison his wife died in child birth.  On his release he moved, with his two children, to Opole in Upper Silesia but he struggled to find work, eventually returning to teaching.  In 1952 he married Alina Gajewska, whom he met during the course of his work and study; they had two further children together.

He had built up an eminent reputation as a scientist and writer and was awarded the Gold Cross of Merit and a Gold Medal from Wroclaw Technical University.

With special thanks to Wojciech Zmyslony for much of the information and the photograph from his polishairforce website
Posted by ARCHIVE at 00:26 No comments: Links to this post