For anyone interested in progress on the story of Stanislaw Jan Piasecki; new pictures have been added to the entry in his name dated 4th October 2010 , which can be accessed by the simple expedient of typing his name in the search box at the top left of the blog page.
Posted by ARCHIVE at 21:00 No comments: Links to this post 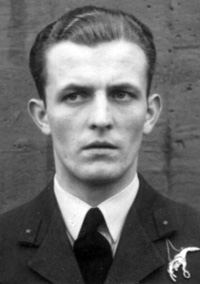 He was born on 30th September 1916 at Krotoszyn, a Prussian  province of Posen, and was educated there.  He graduated in May 1937 and then joined the army, being enrolled in the Officer Cadet Artillery Reserve School at Wlodzimierz Wolynski.


On 3rd January 1938 he was assigned to the Officer Cadet Aviation School in Deblin, where he trained as a pilot on the PZL23 Karas bomber.  He graduated from this course in 81st position on the XIII Promotion.  He was promoted to 2nd Lieutenant on the first day of the war and was evacuated to Eastern Poland on the same day.


When the Russians invaded on 17th September 1939, his group crossed into Romania where he was interned in the camp at Slatinie.  He escaped a few days later and made his way, via Bucarest, to Balcik, a port on the Black Sea where he boarded a ship (the St Nicolaus) for Beirut, Lebanon.  From there he, and a group of Polish Air Force officers, boarded another ship (Ville de Strasbourg)  and sailed for Marseilles.  He made it to Marseilles on 29th October 1939 and reported to the barracks at Salon. 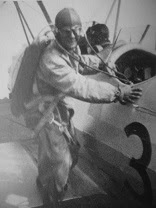 Deblin 1938  -  PWS-26 Advanced Trainer
He volunteered to come to Britain and then, in January 1940, took a boat from Cherbourg to Southampton and was posted to RAF Eastchurch in Kent.  His first tasks were to learn English and to familiarise himself with the Kings Regulations.  At the end of the spring of 1940, he finally moved, with the whole Polish contingent to RAF Blackpool.  This was because RAF Eastchurch was a front line fighter base for the Battle of Britain and not a safe place to train these desperately needed volunteers.


From there, he was assigned to 15 Elementary Flying Training School at Carlisle in Cumberland for a refresher course and to make himself familiar with the controls of British aircraft, which were radically different from those of Polish and French aircraft.  He was also sent to 1 Air Armament School at RAF Manby, Lincolnshire for practical flying experience on British aircraft.  Later, on 15th July 1941, he was sent to 18 OTU, at RAF Bramcote in Warwickshire for operational training prior to combat flying.


In September of that year he transferred to 304 Squadron at RAF Lindholme, Lincolnshire  from where he saw his first combat.  On the night of 7th October 1941 he flew on his first mission to bomb the docks at Boulogne, France, beginning a campaign of bombing the French coastal ports.  He followed this up with an attack on Cherbourg on 25th October and another on Calais on 7th December.


On 16th December 1941 he was second pilot to Squadron Leader Jan Blazejewski and they took off in R1064, at 16.57 hours on a mission to Ostend, Belgium.  His aircraft was shot down by a German night fighter and was seen to crash into the sea about 30 kilometres from the Kent Coast.  At 19.05hrs, a distress signal was received at RAF Manston in Kent, but nothing could be done.  The whole crew perished and only four bodies were found; his was not one of them and he has no known grave.  He was posthumously awarded the Field Pilot’s Badge.  The other crew members were PO Jan Komlacz, Sgt Boguslaw Golabek, Sgt Kazimierz Suwalski and Sgt Hubert Rutkowski.

My thanks to Ryszard Kolodziejski for much information and photographs from his collection
Posted by ARCHIVE at 22:14 No comments: Links to this post

When I started this blog, my stated intent was to educate the British public about the extent of the Polish involvement, commitment and heroism in the defence of this little island group of ours.  My basic intentions were motivated by my own ignorance on the subject, before I became interested in the activities of 304 Squadron.
More than five years later, I find that just over 65% of the people who have shown an interest are NOT British, or at least, not domiciled in Great Britain.  Even I realise that many of the British domiciled readers must be of, at least, partial Polish ethnic origin - I had no idea that my blog would generate interest in over 109 countries and territories in every continent except Antarctica - and there are very few people there anyway!
So, basically, I would like to thank all the people who have helped me over the last five years, or so.  You may not realise it, but you have also helped quite a few people to find out about their family members who served in the Squadron.  So - what else can I say, but Thanks!
Posted by ARCHIVE at 17:51 No comments: Links to this post