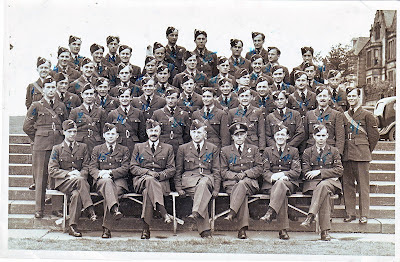 Taken at St Andrews, 1942, just after arriving in Britain; he is 4th from the left on the 4th row back 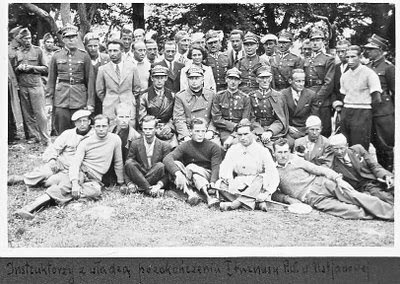 Taken in Poland before the War; the inscription reads Instructors and Trainees. He is second from the right, lying down 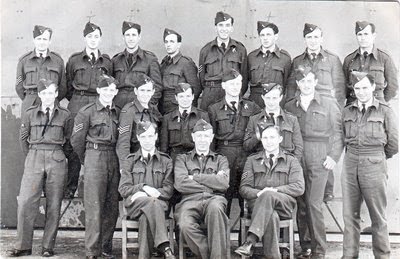 I have received the above 3 photographs from Patrick Micel, whose father, Sgt Ferdynand Micel, fought with 304 Squadron during their Coastal Command days. Once again, I felt strange looking at the faces of the men I have been researching for so long - especially when I can now put a face to a name that I have been working with. Like so many Poles, he ran away to fight another day (in France) then again in Britain. Thank God the Poles didn't know when to give up because we'd have been in dire straits without them. Heroes one and all. Anyway, here's his story:

MICEL Ferdynand (Sgt)
Attacked and damaged a U – Boat in the English Channel on 21st June 1944. He was born in Berdjansk, Ukraine but lived mostly in Bialystock, Poland until he was captured by the Russians on 17th September 1939. He was sent to Krzywy Rog then Siewzeldorlag in Siberia on 11th September 1940 where he suffered the mental torture of at least one “mock” execution, involving a night in the condemned cell and a visit from a priest. In 1941 he was transferred to Juza camp in Iwanowska province and then, on 4th September 1941, he was able to come to the UK from Archangel. He trained on gliders at Leeming and Sutton Bank and then spent time with 304 Squadron in Coastal Command. Later he flew weather flights from RAF Aldergrove (Belfast) and served at Hullavington, Syerston and Hornchurch ending up at Gan in the Maldives. He survived the war and died on 6th April 1983 in Leicester and his ashes are buried in Wrexham, Wales beside his mother and sister.
Posted by ARCHIVE at 20:44 No comments: Links to this post 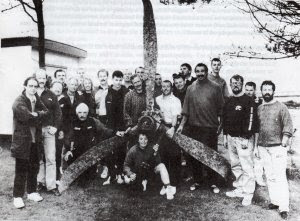 On the way to an anti-submarine sweep, this aircraft was struck by ferocious cross winds and failed to take off. It was blown over the edge of the cliffs by the runway at RAF Dale and the entire crew were killed.
The wreckage was found on 21st September 1991 by divers from the Llantrisant Sub Aqua Club. Subsequently machine guns and propellers were recovered and restored; one of each is now on display at the ATC museum, Abergavenny, South Wales. A similar set was donated to the Polish people in a ceremony aboard the sailing ship Iskra on 15th July 1993, which was attended by members of the Polish Military and War Veterans Association. The vessel was docked at Newcastle upon Tyne for the Tall Ships Race. These relics are now housed in the Military Museum in Warsaw. The picture shows members of the club with a propeller recovered from the wreck.

Posted by ARCHIVE at 22:40 No comments: Links to this post

On the night of 27/28 April 1942, W5627 was shot down on its way home from a bombing mission to Cologne and crashed near Chatel_Censoir, France. There are reports that Sergeants Lipski and Polesinski were killed but RAF records show that Lipski was captured and interned in camps L3 and 4B. Polesinski also survived and escaped to Gibraltar. Mariusz Konarski states that the whole crew were interned and later returned to England. Other reports claim 2 fatalities but do not name them. The pilot, F/O Julian Morawski escaped via the Free French Zone and into Spain where he was interned but escaped and made it to England.
That leaves 2 crew members with stories untold so if anyone has information on them, I'd love to hear from you. Their names are Wacinski and Woznial.
Posted by ARCHIVE at 16:03 1 comment: Links to this post

The last flight of R1392 started out as a perfectly normal mission for the Polish crew. Their target was the French port of Boulogne where the Germans had assembled a fleet to invade the United Kingdom. The crew knew that the anti-aircraft and night fighter defences were particularly strong but were not deterred from doing their duty. They made the usual pre-mission short flight to test their equipment and then returned for the aircraft to be fuelled and armed before they set off. They went through the routine briefing where they were given details of their target, route, defences etc. It was a clear night with no cloud cover – beneficial to both bombers and defences – and they were due over the target less than half an hour after midnight.

The mission went well and they dropped their bomb load without problems but then they were hit, by flak, in one engine, and made a very significant drop in altitude before the pilot wrestled the aircraft back under control. One crew member had already baled out and was lost forever, with no known grave. Once back over England, the second engine caught fire and the aircraft was doomed but two more crew members baled out and survived with only minor injuries. Sgt Jozefiak crawled half way out and then pulled his ripcord, which dragged him out to safety. A wild gamble which could have seen him severely injured or killed had he been hit by the tail fin or the propellers. Sadly, the plane failed to make it to an airfield and crashed, killing the three remaining members of the crew.
Posted by ARCHIVE at 17:23 No comments: Links to this post

I am delighted to have made contact with Mariusz Konarski, author of 304 Squadron, and he has promised to send me some information on the Squadron. With his knowledge, I am sure that this will be quality stuff and I am anticipating great things. More as soon as I have it.
Posted by ARCHIVE at 23:34 No comments: Links to this post

I SPOKE TOO SOON

In the few minutes since I posted the last entry I have received a few photographs of 304 Squadron graves in Newark Cemetery. My friend who took the photographs has several more which he will pass on in the next few days so the information stream has started to flow again. Additionally, I have been reviewing notes that I have made and I will have much more to post very soon.
Posted by ARCHIVE at 21:15 No comments: Links to this post

IT'S ALL GONE QUIET

I am disappointed that the last couple of weeks have seen the information flow dry up. Disappointed but not disheartened because I've been through these slow periods before. I have totally given up hope of receiving photographs of Jan Stanislaw Waroczewski from his niece. I can't understand why she hasn't sent them but I just have to accept the fact. So, if any one out there can help, please leave a message here or e-mail me at nevillebougourd@gmail.com
Posted by ARCHIVE at 21:07 No comments: Links to this post

I'm getting disappointed that information sources have appeared to dry up in the last couple of weeks. Disappointed but not disheartened as I've been through these quiet periods before. I have now totally given up hope of receiving photographs of Jan Stanislaw Waroczewski from his niece, so if there's anyone out there who can help, please leave a post here or e-mail me on nevillebougourd
Posted by ARCHIVE at 00:21 No comments: Links to this post