A BIT OF HUMAN NATURE

Taken from www.scotsatwar.org.uk with thanks
A poignant and melancholy letter from a 304 Squadron crewman at RAF Benbecula. Reading it saddened me and accented the hardships experienced by Poles on remote outposts fighting a war they never wanted, but one they wouldn't run away from.
"Summing up their loneliness, George (Jerzy) Glebocki of 304 (Slaski) Squadron wrote from Benbecula in 1944, "
“ Our quaint little isle, inhospitable and unfriendly as it seemed at first has many hidden charms. As if nature herself in recompense for bad weather and rain, wanted in the rare moments of respite, to stun and intoxicate us. Morning rose like many others, bathed in misty drizzle. A new flight was already hovering somewhere out over the icy Atlantic, tracking German U-boats, waging a cunning and ingenious war against the inventive skill of German engineers, and against the U-boat Schnorkel. An almost hopeless war. So many flights endured in vain in this terribly difficult struggle. So many hundreds of hours of torture, vomiting, engines and crews dying in wild, devilish burst of squalls, in the cruel clutch of icing 500 feet over the raging Atlantic. Till finally one morning in the grey dawn “X”, for X-Ray, from our Squadron reported that he was attacking a streak of smoke ahead of him. A flame growing from the water. He knew that it was the first and probably the last chance for attack. The explosion and the plume of foam blotted out the scene. When the water settled there was on the spot of the attack an ever-widening patch of shiny oil. That was all. Hundreds of flying hours for an attack lasting a few seconds. Night again lengthens and at last the wind falls. Slowly we leave the mess. This solitude on the island, this desertedness, this overlooking of all our work. The uncertainty of our fate and our morrow, and the wrong done against the living body of our nation, against all that is holy to us. What is the aim, the essence of this war? The wind catches our words and tosses them into space. We do not know whether it is the wind or the rain, or whether tears flow over our cheeks”.
I am sure you will have your own feelings on this.
Posted by ARCHIVE at 22:44 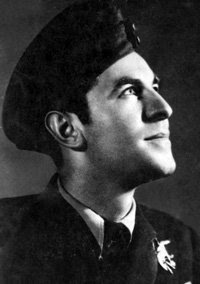 In December 1939 he fled to France via Slovakia and Hungary where he was interned but escaped again finally getting to Marseilles via Jugoslavia. He then went to Cherbourg via Paris and took ship to Southampton. He worked as a mechanic aon Hurricanes and Spitfires then retrained as a navigator but specializing in radar. He trained at RAF Blackpool and at RAF Silloth before being posted to Coastal Command at RAF Benbecula on 6th October 1944. He and his crew flew 14 missions before the war ended; the first was on Christmas Eve 1944 when one of their engines caught fire and was extinguished by a steep dive. On another occasion they were out of fuel and landed with a full load of bombs, much to the consternation of the ground crews! He survived the war and returned to Poland. He won the Silver Cross of Merit with Swords. He was still alive in August 2004.
Posted by ARCHIVE at 22:18

ONE GOOD TURN DESERVES ANOTHER!

Tonight I received an e-mail from a lady in Poland; she had been reading this blog and asked for information on her great uncle. I had never heard of him and I was sure he was not from 304 Squadron. Nevertheless, I did a bit of digging and found an obscure website with his name on it. It led me to other information on an aircraft crew that I had not previously recorded. I hope the lady was happy with what I sent her because I am ecstatic with what I found out on the crew and particularly the navigator (see my next post). It pays to help people.
Posted by ARCHIVE at 22:08 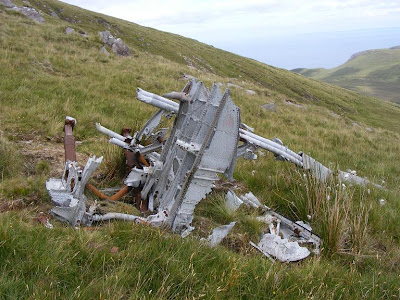 On 21st December 1943, HF208 was struck by lightning and crashed in flames into a remote hillside in the Irish Republic. I have known about this crash for quite a while now and felt sad at the agonising deaths experienced by the crew. The thought of death by fire has always horrified me since I was in a house fire many years ago.

I have recently discovered that these men were not burnt at all; they were thrown clear of the aircraft but were killed by exploding ammunition from their own machine guns. Today I received this photograph of some of the wreckage, still lying where it fell sixty five years ago; a poignant memorial. Thanks for the photograph go to Dennis Burke, whose own website on the subject of air crashes in Ireland is one of the most impressive I have ever seen.
Posted by ARCHIVE at 00:21